I came across this article on the Telegraphs website about how an increasing number of children are beginning school with extremely poor language.

Whilst it seems natural to read your child a bedtime story, talk with them or teach them letters, this is not the case for all parents. It is becoming increasingly common that pre school/nursery staff are the ones teaching children basic language skills as these disadvantaged children have unfortunately not learnt these skills at home.

Having good language skills are an essential component in life and therefore it is crucial that these skills are mastered early on. Language impact many other areas including literacy, hence a lack of language leads to difficulties within school, in the wider community and later on in life in terms of jobs.

Please find the link below:

A programme about a group of 10 young girls left alone in a house without adults and rules… it’s quite disturbing how horrible little girls can be to one another! It also shows how pre teens also need boundaries and adult supervision.

I was scrolling through Twitter this evening and amongst the tweets about how they they are feeling, how stressful people’s lives are and how expensive make up is, I stumbled across this. A picture drawn by a child that really shows how hard, difficult and cruel life can be.

I feel this picture needs no explain other than it is born by a child. Not from her imagination but from her memories of what happened to her entire family. Life is cruel. There is no reason that anyone should face such situations but children? Really? What a sick world we live in.

In the western world we complain. I can’t deny the fact I’m guilty of moaning about minor inconveniences like my train being delayed or Tesco running out of my favourite sandwich but why don’t we stop and think? I urge you to tackle each day without whingeing. We really have nothing to complain about. Life really isn’t that bad for us.

When thinking back to my childhood or even my early adolescents I never even really knew about the world. I had no idea that there was such hatred and unkindness in the world. But, there are children in the world who are not as fortunate. What the children of the third world face on a daily basis is not ok. We can’t ignore it any longer. Something must be done. 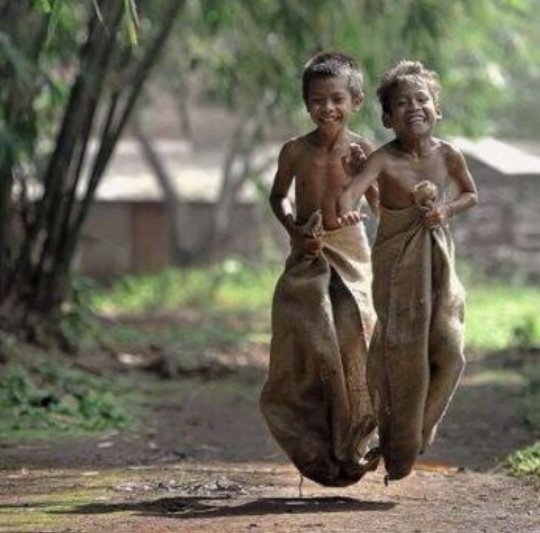 Just take a moment to look at this picture, to study it in detail and to savour this image of pure and utter happiness in your mind.

In today’s society children in the Western world have an alarming high number of toys and, in general, very little respect for them. Children often don’t recognise how privileged they are, how lucky they are to have a multitude of items to play with. Gratitude is key.

The picture above shows the up most gratitude, thankfulness and appreciation for the smaller things in life. It’s hard to judge something from just a picture but a picture can tell a thousand words. These children probably have nothing other than the sacks they are playing in but they are making the most out of their situation. You can’t deny they are having fun and living their childhood the way childhood should be lived. No iPad in sight and yet a look of pure happiness on their faces and a moment these little, innocent boys with treasure for the rest of their lives.

Stop. Think and appreciate the moments of  joy in life.

One to watch. A real tear jerker and a wonderful insight into what it’s like to live with a stammer. We use speech everyday in order to communicate which is why stuttering has a detrimental impact on the well being of those who suffer with them. This ITV programme also shows the McGuire programme in action, a fascinating approach with even better results!

The link to the programme is below, enjoy!

Firstly i’d like to apologise for the 5 month absence. I took some time off to finish my degree and travel before beginning my Masters in 2 weeks (EEK!). I also only post when I feel inspired and it turns out I haven’t been feeling that inspired lately. There is so much bad in the world that there seems to be a focus placed on that rather than the good which has left me feeling a little deflated. Don’t get me wrong, there are moments that make me appreciate how great the world is but I currently feel they are overruled by negativity. However, you can always rely on a child to brighten up your day.

I have been following Family Fizz on YouTube for a couple years now. They are a family of vegans who vlog their daily lives with an aim to inject happiness and positivity into their viewers lives and they do a pretty good job of it too. This morning I had the joy in watching their 5 year old daughters birthday vlog. Now, I know what you’re thinking another video of a spoilt child opening a never ending supply of presents. Incorrect.

When little Sienna was asked what she wanted for her birthday her response was “I want to give toys to charity because I have everything I need.” So, that’s exactly what they did. The family went on a shopping spree in Toys R Us and filled up two trolleys worth of toys to donate to children who are less fortunate than themselves. What 5 year old do you know that would rather give than receive hey?

The video brought tears to my eyes because it’s just so beautiful to see how well raised this precious 5 year old girl is. So selfless, so kind and just so grateful for everything she has.

I’m sure Darren and Georgie (parents) will never see this post but if you’re reading this well done. You have restored my faith in parenting in the 21st century.

A really lovely programme that gives those that struggled with school a second chance at a jockey training school. It’s great to see how the teenagers blossomed whilst spending time with nature and horses.

There are moments in life that make you stop and think. This picture is one of those moments.

I’m not saying that all children with a never ending supply of toys are always sad and a child with only one toy is always happy but it appears as though those with less appreciate what they have a lot more.

I have been following two families on YouTube recently (the channel names shall remain nameless) but one family spoil their children at any given opportunity whilst the other family lead a minimalistic life where the children have limited toys yet, it is without doubt that the children from the latter family have much more appreciation for everything they have in life. They appreciate their food, nature, the outside world and their lives.

I am not condemning those who spoil their children yet I urge you to stop and think. I mean does your child really need 10 dolls? It is important to teach children from a young age that you have to work hard in life to achieve.

I have just finished watching these two documentaries by the BBC. They follow the lives of three Welsh teenagers who go and live with a South Korean family for three days and follow their South Korean counterparts at their day at school.

I have to admit the South Korean education system shocked me. The amount of time these children/teenagers spend studying is mind – blowing. Yes, they do receive some of the best grades in the world and are undoubtedly highly academically intelligent but it is no surprise considering how much effort they put in to be the best they can possibly be.

Pupils sit in the same seat in the same classroom for around 10 hours a day. The style of teaching differs from that here in the UK as students are simply told how to do something, they memorise it and that’s that. There are no questions asked, no discussions in the classroom but rather silence and concentration. There is a real emphasis on getting good grades and going to the top university so much so that students often spend around 5 to 6 hours after school at private evening institutions for further academic tutoring or conduct their own self study. Students often wait to go into the library as it is so busy and children as young as 10 can be seen studying till around 10 in the evening.

Emphasis is placed on being the best rather than on being happy. Although academically South Korea do very well, they rank very low on the “are you happy?” scale. In the documentary a university student was asked about his high school experience. He stated how he had lost a few friends due to suicide due to the high levels of stress their families had put them under. South Korea has some of the highest suicide rates in the world, which seems like no surprise after hearing of their tiresome, long, strenuous days.

They have no time for social activities, no opportunities to be creative, no time to play or listen to music or to attend concerts and enjoy the arts because they study so much. There is often not much time for sleep either, with the headmaster claiming 6 hours was more than sufficient. I personally feel that if my brain was drilled of information for 16 hours a day i would like a little more than 6 hours sleep before cramming in more information the next day.

However, is it really all bad? culturally South Korea is very different to the UK and America. All families see the up most importance in education and do all they can to provide the best educations for their children. This may mean moving across the country in order to attend the best schools or working long hours to earn the money to send their child to the private tutor sessions after school. It is a social norm for families to not see each other due to long working hours yet, in the western world family time is viewed as almost more important than education.

Something I admired from the documentary was the respect teachers had in South Korea. There was a statue of a man who had said that the king and teachers are equal, something you would never hear in the western world. Instead teachers are paid low wages, are disrespected by students, often frowned upon by society and yet are under enormous amounts of pressure and work hard! It is a real honour to become a teacher in South Korea due to the high status and job security yet ambitions to become teachers in the UK are not quite to the same level.

It seems as though the South Korean education system does have its flaws yet times are changing. They are encouraging students to be more creative from a younger age and have introduced sport into schools. Following by the western example of allowing children to be more free. But, the South Koreans seem to have ambition that puts the rest of the world to shame. Perhaps this is something we need to drill into our children a little more.

The documentary can be found below: